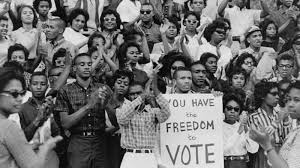 Research from two UC San Diego Rady School of Management studies released Tuesday says that while the 1965 Voting Rights Act contributed to economic improvements for Black Americans, a 2013 Supreme Court ruling striking down a key provision in the act has led to economic disenfranchisement for that same group.

The first study — a working paper — found that counties where voting rights were more strongly protected experienced larger reductions in the Black-white wage gap between 1950 and 1980.

The second paper, published recently in the journal American Economic Association Papers and Proceedings, presented evidence that counties previously covered by the act started seeing a decrease in public sector wages for Black workers relative to wages for white workers, especially for new hires, as early as five years after the 2013 Supreme Court decision in Shelby County (Alabama) v. Holder.

In the Shelby case, the high court struck down as unconstitutional Section 5 of the Voting Rights Act, which had mandated that certain states and localities with histories of racial discrimination obtain federal "preclearance" for any voting changes they implemented — as well as demonstrate that any proposed changes not have a discriminatory purpose or outcome.

The court found that Congress exceeded its authority in 2006 when it reauthorized Section 5 for another 25 years.

"The VRA reduced economic inequality between Blacks and whites in two ways," he added. "First, it contributed to the expansion of public employment opportunities. And, second it contributed to and complemented the enforcement of labor market policies such as affirmative action and anti- discrimination laws."

Both papers by Avenancio-Leon and his co-author, Abhay Aneja of UC Berkeley, focus on Section 5 of the VRA, which applied to practices or procedures in counties with histories of racial discrimination, primarily in the South and Southwest.

Avenancio-Leon said the research revealed the act was able to empower Black families economically — decreasing the wage gap by a statistically significant 5.5% — because it changed the political preferences of politicians.

Their analysis of the wage gap after the key section of the act was rendered ineffective compares trends in the Black/white wage gap in pairs of counties that share a border, where one county was previously covered by the now-null provision and the other was not.

The authors also found that voter turnout increased from 1968 to 1980 by 6.5 to 11.5% per election, with a jurisdiction's turnout increasing by 2% for every 10% increase in its population share that was Black.

As of Jan. 14, legislators in at least 27 states have introduced, pre- filed or carried over 250 bills with restrictive voting provisions, compared to 75 such bills in 24 states on Jan. 14, 2021, according to research.

These enacted and proposed laws include vote-by-mail restrictions, restrictions on early voting and broader authority for purges of voter rolls.

"We hope that the evidence in our research is informative for lawmakers," said the report authors. "In an era of increasing income inequality, it is worth considering the role of minority political disempowerment."