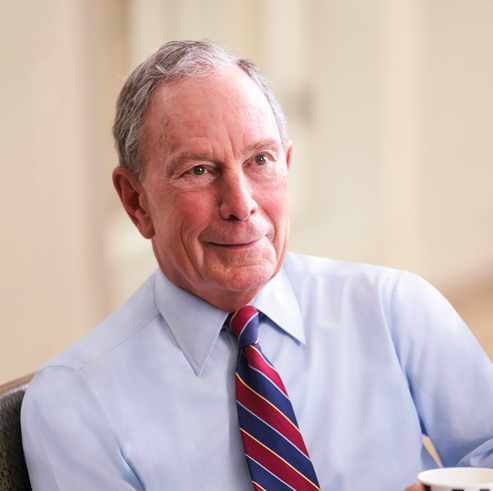 More than $15 million of the pledge will fund programs at six colleges with a record of graduating Black students who go on to pursue successful STEM careers. The institutions are Howard University, Morehouse College, Morgan State University, Prairie View A&M, Spelman College and the University of Maryland, Baltimore County.

Michael Bloomberg is adding $150 million to the record-setting $3 billion-plus he’s given to his alma mater, Johns Hopkins University. In an announcement yesterday, Bloomberg Philanthropies said it was making the donation with the goal of increasing racial diversity among students pursuing doctorates in science, technology, engineering and math.

The pledge will go mainly toward funding 100 doctoral candidates admitted to the 30 STEM programs at Hopkins. They’ll study subjects ranging from neuroscience to engineering. According to Associate Dean Damani Piggott, who is directing the diversity initiative, it costs roughly $300,000 per student to fund a Hopkins Ph.D. “The funding will allow that coverage in perpetuity,” Piggott says. The Bloomberg money will meet students’ total financial need, including travel, health insurance and support for research projects.

“By supporting JHU’s world-class STEM program, and by partnering with historically Black and minority-serving schools that have a strong record of educating students who go on to get STEM Ph.D.s,” said Michael Bloomberg in a statement, “we will help increase diversity in industries that will pioneer advances we have not yet even imagined, and shape the lives of generations to come.”

More than $15 million of the pledge will fund programs at six colleges with a record of graduating Black students who go on to pursue successful STEM careers. The institutions are Howard University, Morehouse College, Morgan State University, Prairie View A&M, Spelman College and the University of Maryland, Baltimore County.

“We applaud the Bloomberg gift,” says Morgan State President David Kwabena Wilson. “You can’t get diversity in doctorate programs by only looking at elite institutions.” In December, billionaire philanthropist and author MacKenzie Scott surprised Wilson with a gift of $40 million to Morgan State.The doctoral students recruited through the Bloomberg program will be called Vivien Thomas Scholars, named for a Black surgical laboratory supervisor who developed a life-saving cardiac surgery technique to treat “blue baby” syndrome in the 1940s. Thomas, who grew up in the Jim Crow south and dropped out of an HBCU during the depression, received no credit for decades. He never became a doctor but he had a long career as a research and surgical assistant and Hopkins gave him an honorary degree in 1976.

Bloomberg’s last gift to Hopkins, in 2018, was a huge sum: $1.8 billion to create a fund to help low- and moderate-income students attend. Dedicated to undergraduate financial aid and recruitment, the fund has boosted the share of incoming first-year students who identify as members of historically underrepresented groups to 32.5%.

The 79-year-old cofounder of the eponymous Bloomberg media and financial information empire, Bloomberg served as mayor of New York City from 2003 to 2013 and launched a failed run for president in 2019. He is the 20th richest person in the world, with a net worth of $59 billion.

In 1965, the year after he graduated from Johns Hopkins with a bachelor’s in electrical engineering, he made his first donation to the Baltimore-based university. The total: five dollars. Counting the latest pledge, his donations to Hopkins total $3.55 billion, the largest amount any philanthropist has given to an American institution of higher education.