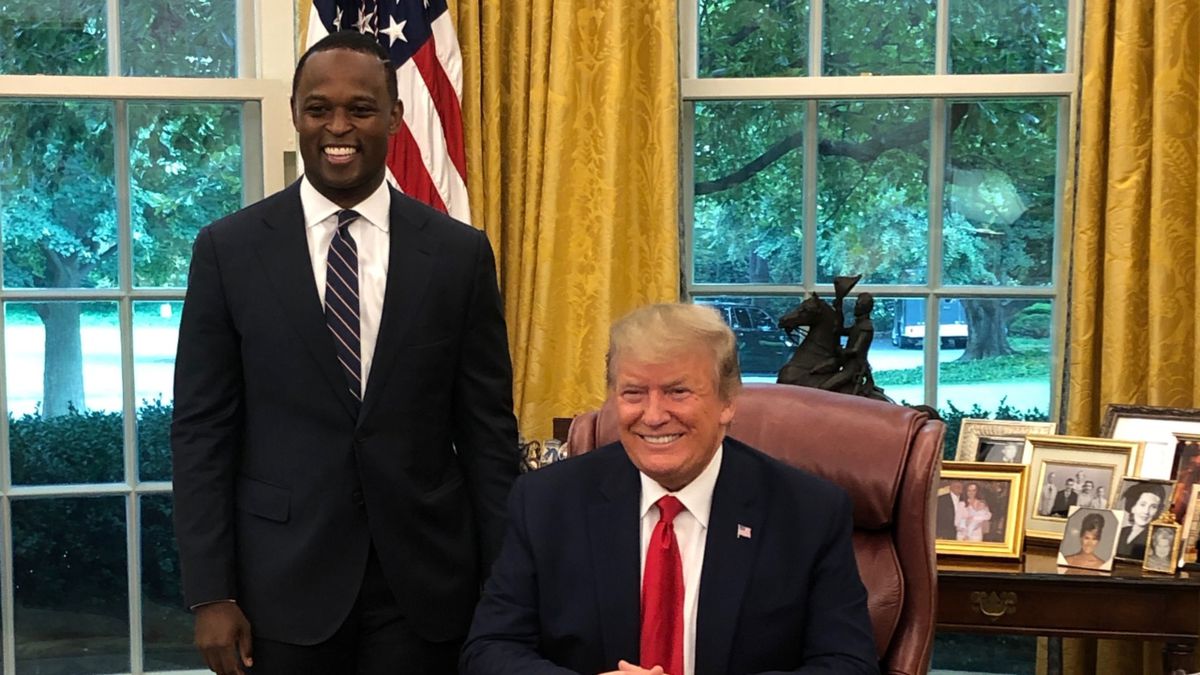 Kentucky Attorney General Daniel Cameron had the audacity to speak at the Republican National Convention on Tuesday after it’s been over 150 days since Breonna Taylor‘s death and her killers have yet to be charged by his office. According to the Courier Journal, Cameron also had time to come after Democratic presidential nominee Joe Biden in his speech. The fact that Cameron even showed up to the convention when his office is facing major public scrutiny caused backlash.

“I am Black…And you can’t tell me how to vote because of the color of my skin,” Cameron said during his Tuesday speech.

“I think often about my ancestors who struggled for freedom. And as I think of those giants and their broad shoulders, I also think about Joe Biden, who says: If you aren’t voting for me, ‘you ain’t Black,'” Cameron said, referencing a comment Biden made during a May interview with The Breakfast Club radio show. Biden later apologized for his words after facing backlash.

“Mr. Vice President, look at me: I am Black. We are not all the same, sir,” he said. “My mind is my own. And you can’t tell me how to vote because of the color of my skin.”

“Joe Biden is a backwards thinker in a world that is craving forward-looking leadership. There’s no wisdom in his record or plan, just a trail of discredited ideas and offensive statements.,” Cameron continued. “Joe Biden would destroy jobs, raise our taxes and throw away the lives of countless unborn children.”

Cameron joins the disconcerting list of Black Republicans showing their allegiance to Donald Trump, who’s running for reelection as president in the 2020 elections.

Cameron went on to say “Republicans trust you to think for yourself” and he accused Biden of being “captive to the radical left,” which he described as a movement “committed to cancel culture” that believes “your skin color must dictate your politics.”

Clearly, thinking “for yourself” is more important to Cameron than seeking justice for Black people who were unnecessarily killed in their own homes by the police.

Cameron then had the nerve to mention Breonna Taylor’s name, although he didn’t go into details about the investigation.

“Even as anarchists mindlessly tear up American cities while attacking police and innocent bystanders, we Republicans do recognize those who work in good faith towards peace, justice and equality,” Cameron said on Tuesday night. “Whether you are the family of Breonna Taylor or David Dorn, these are the ideals that will heal our nation’s wounds.”

“Republicans will never turn a blind eye to unjust acts, but neither will we accept an all-out assault on western civilization,” he added.

Cameron has risen to the spotlight as a Republican in Kentucky, becoming the state’s first Black attorney general in November 2019. He also has a work history and close relationship with Senate Majority Leader Mitch McConnell.

His office has been leading the investigation into Breonna Taylor’s death and they have the power to bring criminal charges against the officers involved at the state level. Taylor, a 26-year-old ER technician, was shot and killed back in March after Louisville cops entered her home on a no-knock warrant.

At first it seemed hopeful that Cameron would announce charges after he met with Taylor’s family and their lawyers over a week ago. However, days have gone by and still no charges.

Protests for Breonna Taylor are just a fraction of the many demonstrations occurring nationwide over police violence and systematic racism. Demands have ranged from seeking charges for officers who’ve summarily killed Black people, to defunding the police, to abolishing systems that harm Black people altogether.

Despite Cameron putting the spotlight on people who “mindlessly tear up American cities,” many protests have been peaceful. Cameron got a taste of what peaceful direct action protests feels like when demonstrators occupied his property demanding justice for Taylor.

Despite the outcries, Cameron still made time to go to the RNC and folks were not happy. Check out some Twitter responses below.