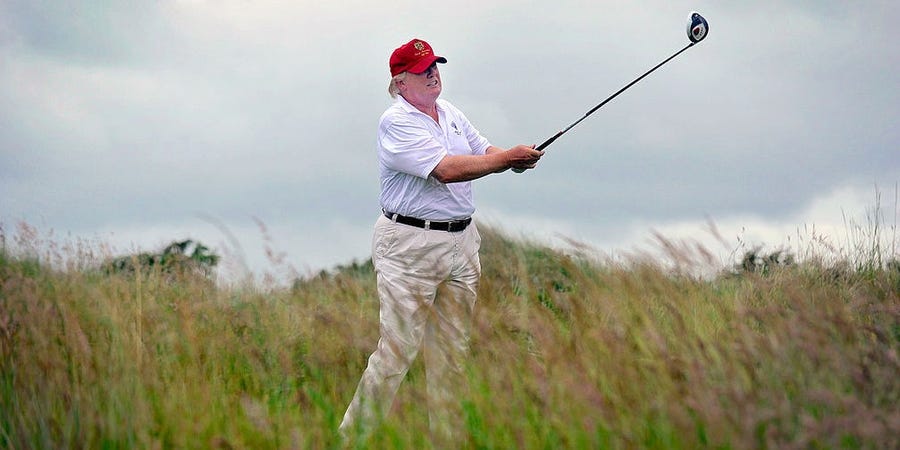 The president is back at his New Jersey golf resort, bringing his taxpayer-paid golf tab to $142 million.

President Donald Trump returned to his New Jersey golf course Friday to host a campaign event, meaning yet more donor and tax dollars flowing into his own cash registers.

New York City’s police union is set to endorse Trump’s reelection at his Bedminster resort Friday evening, allowing it to charge Trump’s campaign for the rental of the meeting space and catering. Taxpayers, meanwhile, must pay for rooms and food for Secret Service agents and other staff during his stay.

Neither the Trump campaign nor the Trump Organization, his family business that runs his hotels and golf resorts, responded to HuffPost queries about how much the campaign would be charged for Friday’s event.

The Washington Post has reported that the Secret Service has been renting a cottage for agents to stay in for $17,000 a month, even when Trump is not there ― an amount higher than homes in the surrounding area rent for.

And filings with the Federal Election Commission by the Trump campaign, the Republican National Committee and its two joint fundraising committees show total payments of $86,982 to the golf course from the time Trump took office through June 30, 2020.

In all, those campaign committees have sent $6.9 million to Trump’s various businesses, including $639,031 to Mar-a-Lago, his Palm Beach, Florida, resort, $1.7 million to his hotel in New York City, and $1.6 million to Trump Tower for office space, even though the campaign is based in an Arlington, Virginia, high-rise a few miles from the White House.

This weekend’s trip to Trump National Bedminster is the president’s 23rd since taking office, and will increase his golf-related taxpayer tab to $142 million in travel and security expenses. Each trip to Bedminster costs taxpayers about $1.1 million, compared to $3.4 million per trip for his visits to Mar-a-Lago, of which there have been 30. Trump has also visited his golf courses in Los Angeles, Scotland, Ireland and Doral, Florida, beside the Miami airport, all on the taxpayer dime.

Trump frequently criticized his predecessor, Barack Obama, for playing too much golf, and promised during his campaign that he would be too busy to take any time off. “I just want to stay in the White House and work my ass off,” he said at a February 2016 rally.

Trump, however, has played golf on 2½ times as many days as Obama did through the same point in his term, and Trump’s golf outings have cost more than four times as much as Obama’s. The significantly higher expenses are due to Trump’s insistence on playing at his own resorts, while Obama played most of his rounds at military bases within short motorcade rides of the White House.

Trump has already spent 268 days on golf courses that he owns in his 1,303 days in office, of which 85 have been at Bedminster.