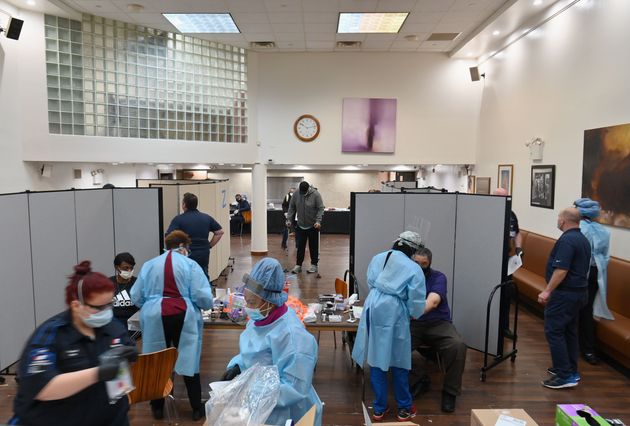 Churches are being used as temporary coronavirus testing centers in an effort to bolster outreach to Black and Latinx neighborhoods.

The first day of coronavirus testing at Bethany Baptist Church, a historic Black congregation in Brooklyn, New York, got off to a slow start. About 130 people showed up Wednesday for diagnostic tests at the temporary testing site, according to Rev. Adolphus C. Lacey.

But by the next day, a socially distanced line stretched down the block outside the church half an hour before the site opened, Lacey said. More than 400 people signed up for antibody testing on Thursday, he said.

“We are swamped,” Lacey, the church’s senior pastor, told HuffPost.

Lacey suspected that appointments would book up quickly until Sunday, when Bethany’s testing site is scheduled to close. But that’s exactly what he had hoped for, the pastor said.

Bethany Baptist is one of 11 temporary COVID-19 testing sites that opened at New York churches this week as part of a partnership between the state’s department of health and its largest health care network, Northwell Health. An additional 13 church testing sites will open next week, according to WABC-TV in New York City.

The testing sites are in predominantly minority neighborhoods in Queens, the Bronx, Westchester and other parts of the New York City metro region.

The initiative seeks to increase access to COVID-19 testing in low-income communities and communities of color, which have been disproportionately affected by the virus.

Lacey has witnessed the effects of this disparity up close. He said his congregation, which averages about 450 weekly attendees, has had six virus-related deaths. The grief his church is experiencing is compounded by the fact that they haven’t been able to gather in person to say goodbye to their loved ones, he said.

“These aren’t names on a roll,” Lacey said about his former congregants. “These are people that we have known, ushers that greeted you and given you a program. And they’re gone.”

In addition, Lacey said he’s aware of over 20 confirmed cases of the virus in his congregation, but he suspects these numbers could be higher. The pastor has noted some stigma in his community around admitting a positive diagnosis. People have also been worried about whether it’s safe to even take diagnostic and antibody tests, he said.

His job as a pastor is to fight that stigma and calm people’s fears, he said.

Bethany Baptist joined other churches and nonprofits in the East Brooklyn Congregations, a local advocacy group, to send a letter to Gov. Andrew Cuomo asking for a way to partner with the government in providing care to communities of color.

The church-based coronavirus testing initiative is a result of that letter, Lacey said.

The pastor is hoping that, after seeing how successful Bethany Baptist’s testing site has been this week, state authorities will extend its dates.

“Coronavirus is a snitch, and it reveals inadequacies, ineptness and disparities. But it also shines a light on greatness and brilliance,” Lacey said. “And that’s what we want to be able to say ― that at this time, we were able to be a beacon of hope and rise to the occasion for our community.”