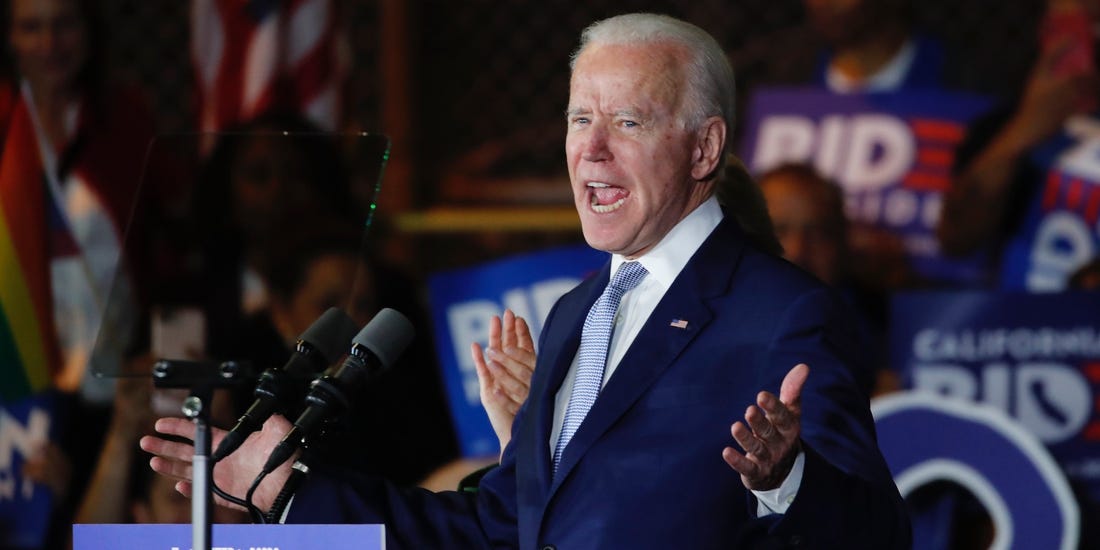 The former vice president romped across the country, Bernie Sanders won California and Elizabeth Warren failed to win a single primary, including her home state.

Former Vice President Joe Biden barely campaigned in Super Tuesday states. He was outspent by tens of millions of dollars and had little to no staff on the ground to reach voters with his message about “restoring the soul of America.”

It didn’t matter. Biden romped to victory across the country on Tuesday, a stunning result for a campaign that looked terminal just a few weeks ago after disappointing finishes in Iowa and New Hampshire.

Buoyed by his blowout victory in South Carolina over the weekend and a slew of Democratic Party endorsements that followed, Biden carried the Southern states of Texas, Virginia, North Carolina, Tennessee, Oklahoma and Alabama. He won in Massachusetts, the home state of Sen. Elizabeth Warren, where he didn’t campaign at all. And he won in Minnesota, a state carried by Sen. Bernie Sanders (I-Vt.) in 2016, where he also made no appearances.

“I don’t think I’ve ever witnessed a 48-hour voter swing like this in my 35 years on this earth,” Alex Goldstein, who worked as a spokesman for Massachusetts Gov. Deval Patrick, tweeted after Biden scored a surprise win in the state’s primary.

Biden’s biggest coup of the night may have been co-opting Sanders’s core argument in the race for the Democratic nomination: that he can attract new voters, grow the electorate and build a multiracial coalition that can defeat President Donald Trump. Across the U.S. on Tuesday, Biden performed well in swing district suburban communities, like in Northern Virginia and Minnesota’s Twin Cities area, which helped Democrats capture the House in 2018. He also did well with white working-class voters in the South and college-educated white voters in the North. But if Biden ends up winning the nomination, it’ll be largely thanks to Black voters, who helped resuscitate his struggling campaign.

Increased voter participation also boosted Biden’s case on Tuesday. As in South Carolina, Virginia experienced a large increase in voter turnout. Nearly twice as many Virginians came out to the polls this year compared to the 2016 Democratic primary. Biden pointed to his double-digit victory there as evidence that he ― and not his rivals ― was growing the electorate.

“People are talking about a revolution; we started a movement,” a jubilant Biden said at an event in Los Angeles, noting the increased turnout and taking a subtle jab at Sanders and his promise to overhaul the nation’s political system.

Though he won in his home state of Vermont and in Utah, Colorado and California, the biggest prize of the night, Sanders underperformed relative to expectations. Some polls showed him winning or in a competitive position in Massachusetts, North Carolina, Texas, and Oklahoma, but Biden carried all four, and he committed few if any resources in doing so.

As early as last week, before Biden’s South Carolina victory, there was talk of the Vermont senator potentially collecting enough delegates by the middle of March that no one else could catch up with him in the race for the nomination. Now a similar conversation will likely take place about Biden’s campaign.

The biggest remaining question of the night is how big Sanders’s delegate lead ends up being in California, which is famous for its slow counting. With 494 delegates up for grabs, the state has the potential to reshape the race once more. Sanders is projected to do very well there, thanks in large part to young voters and Latinos. But Warren and New York Mayor Michael Bloomberg, who failed to win a single state primary despite pouring hundreds of millions of dollars into the race, could play spoiler for Sanders in California, allowing Biden to net some delegates there as well.

Learning the final outcome in the California presidential primary could take weeks, however, meaning the fierce battle for delegates between Biden and Sanders will only heat up during the next round of state primaries next week.

“We expect that the shelf-life of conventional wisdom tonight will be very short,” Sanders communications director Mike Casca said Tuesday, pushing back on the notion that Biden’s success on Tuesday will be a game-changer.

But the race only gets harder for Sanders from here. Coming primaries include Michigan, where he is expected to do well, but also states like Mississippi, Missouri, Georgia, and Florida, where he struggled in 2016 and is currently trailing in the polls.