President Donald Trump took African American guests to his State of the Union speech, ran a Super Bowl ad boasting how he’s making the criminal justice system more equitable for black people and portrayed himself as the champion of education and job opportunities for people of color.

The overtures mean nothing to black voters like Jovan Brown, who loathes Trump’s record on race and sees the Republican president’s African American-heavy guest list at the State of the Union as his penchant for using “black people as a prop.”

“I don’t know too many black people who care for Donald Trump,” said the 21-year-old Brown, who favors Democratic presidential candidate Bernie Sanders. “I’m sure he has black friends, but he’s not a supporter of our community.”

Trump went out of his way to reach out to black voters during his speech Tuesday, touting several initiatives ahead of the November election. His guests included one of the last surviving Tuskegee airmen and his great-grandson, who dreams of traveling to space someday, and a black veteran who struggled with drug addiction and eventually put his life back together with a new job. Trump announced a scholarship for a black fourth-grader from Philadelphia to highlight what he sees as failing public schools.

He trumpeted low black unemployment and poverty rates, his investments in historically black colleges and universities, and the impact of Opportunity Zones.

Critics have long suggested that the real audience for Trump’s appeals to African Americans are white suburban women who may feel more comfortable voting for Trump if they see evidence that he’s not really as racist as he has at times come across. But the campaign has long disputed that charge and is convinced that, if they can just reach black voters and share what Trump has done, including on the economy, at least some may be willing to give him a chance.

But recent polls paint a bleak picture for Trump with black voters.

A Washington Post-Ipsos poll of 1,088 African Americans showed that more than 8 in 10 say they believe Trump is a racist and has made racism a bigger problem in the country. Nine in 10 blacks disapprove of his job performance, overall. 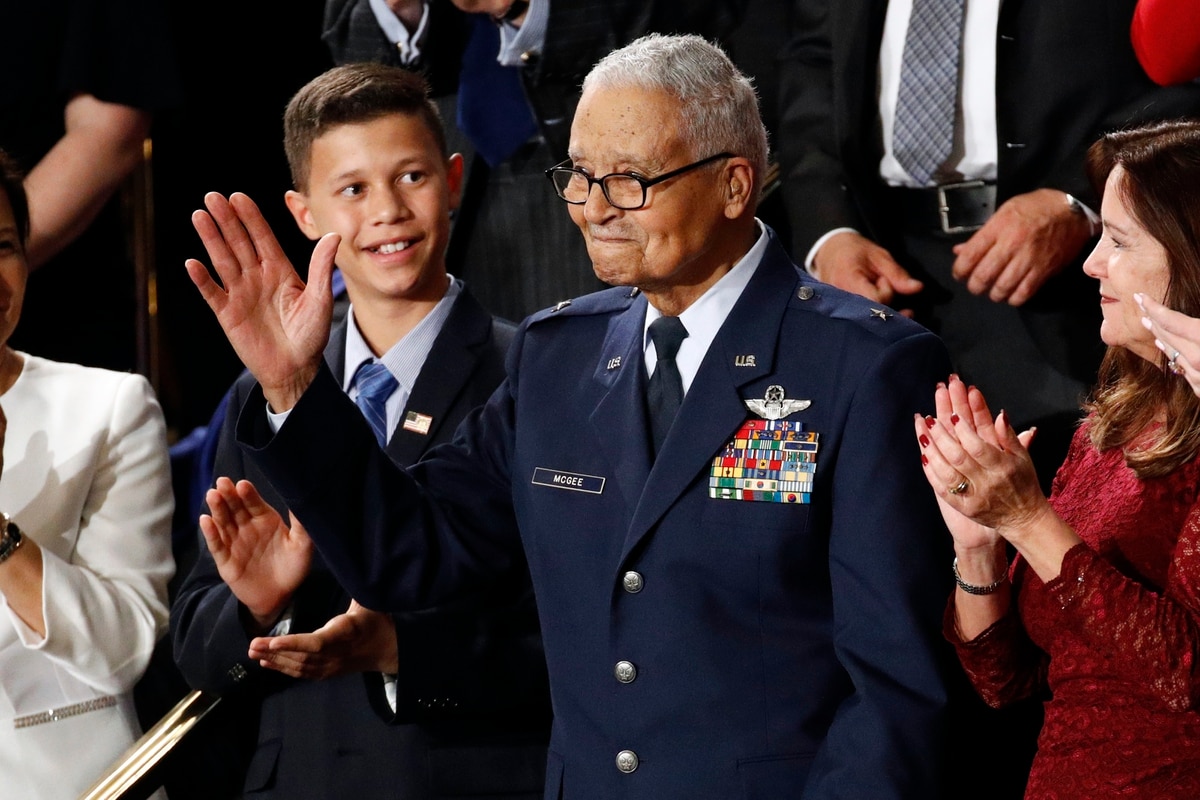 Tuskegee Airman Charles McGee, 100, and his great grandson Iain Lanphier react as President Donald Trump delivers his State of the Union address to a joint session of Congress on Capitol Hill in Washington, Tuesday, Feb. 4, 2020

A Pew Research Center analysis of people who participated in its polls and were confirmed to have voted showed Trump won just 6% of black voters in 2016.

Trump’s public denouncement of former NFL quarterback Colin Kaepernick and other professional athletes who knelt during the national anthem in protest of police violence against African Americans did little to endear him to black voters. Neither did Trump’s professions that there was “blame on both sides” following a 2017 clash between white nationalist demonstrators and counterprotesters in Charlottesville, Virginia.

The stakes are especially high in Detroit. The city is 80% African American and in a traditionally blue state, Michigan, that Trump won in 2016 by 10,704 votes. Trump won Wisconsin by fewer than 23,000 votes and Pennsylvania by about 44,000 votes, two other states that typically vote Democrat in national elections and where black turnout will be key.

Ninety-six percent of the city’s registered voters cast ballots for Democrat Hillary Clinton in 2016, but turnout was down in Detroit. It fell to 48% from 53% eight years earlier when Barack Obama won the presidency.

Critics push back against Trump’s claims of economic progress for the African American community and note that the wage gap between black and white workers remains high. “If we‘re talking about someone working two or three jobs and they don’t have health care and don’t have money to keep the lights on, those aren’t quality jobs,” said Rashawn Ray, a David M. Rubenstein Fellow in Governance Studies at the Washington-based Brookings Institution.

They are also frustrated by the racial climate under Trump, the toll of climate change on their neighborhoods and even Trump’s past words and deeds before he became president.

Brown cites Trump’s stance on the so-called Central Park Five in the 1980s, when five black and Latino teenagers were charged in the rape of a white jogger in New York’s Central Park. That attack became a symbol of the city’s soaring crime. Then-real estate developer Donald Trump took out full-page newspaper ads calling for the death penalty.

The teens said their confessions were coerced, and their convictions were overturned in 2002 after a convicted murderer and serial rapist confessed to the crime.

“He wanted 15-year-old boys murdered even though they were innocent,” she said. “I don’t think he’s changed much.”

But the notion that Trump is racist is a complete myth, said Osigah Kakaq, a 24-year-old black man from Charlotte, North Carolina.

“It’s a Republican stereotype the Democrats use over and over again,” Kakaq said. “It’s Trump’s turn now. Somebody has to earn your vote. No candidate or party can be entitled to your vote.”

With the 2020 race expected to be razor close, the Trump campaign believes that even slim gains among black voters and other groups may be able to push him across the finish line. And the president has scattered support among some black voters, like 67-year-old Jeanine Brown of Phoenix.

She found his speech “uplifting” and listed his economic accomplishments, prison reform and opposition to abortion as areas of significance to African Americans. She’s a conservative Christian who previously voted for John McCain and Mitt Romney because of their record on abortion.

“It’s not about Trump. It’s about the policies,” she said. “I’m a Christian. I don’t think we should be killing babies. I don’t believe in same-sex marriage.”

Trump or no Trump, 19-year-old Bryan Lovejoy of Detroit says he’s not interested in voting in the presidential election come November. He believes Trump is on the “business side of people,” but that’s still not enough to get him to the polls.

“I’m not political,” he said. “I don’t really believe in all of the hype and the government.”