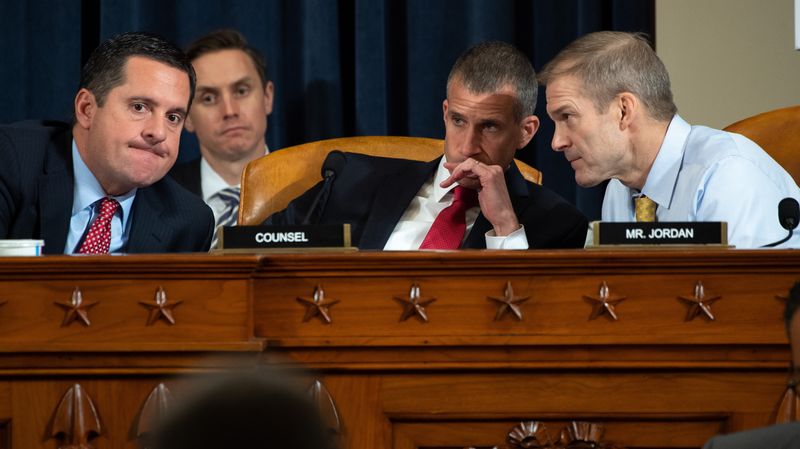 Diplomats Bill Taylor and George Kent were the first two witnesses to publicly testify in the House’s impeachment investigation into President Donald Trump.

The House Intelligence Committee on Wednesday held the first televised hearing of its impeachment inquiry into President Donald Trump. Democrats are investigating his attempt to withhold U.S. military aid to Ukraine until the country’s President Volodymyr Zelensky agreed to investigate former Vice President Joe Biden, who is running for the Democratic presidential nomination.

Bill Taylor, the acting U.S. ambassador to Ukraine, and George Kent, the deputy assistant secretary for Europe and Eurasian affairs, were the first two witnesses to publicly testify in the investigation, after they separately testified privately last month.

Throughout the hearing, Democrats tried to get the witnesses to admit that Trump’s behavior constituted an impeachable offense, while Republicans attempted to discredit the diplomats. Here are seven takeaways from Wednesday’s hearing with Taylor and Kent.

1. Bill Taylor’s Aide Was Told That Trump Cares More About Investigating Joe Biden Than About Ukraine

Taylor revealed new information about Trump’s dealings with Ukraine at Wednesday’s hearing that he had not known about at the time of his private testimony. The ambassador said that last week, an aide told him about a conversation he had with Gordon Sondland, the U.S. ambassador to the European Union who has become one of the most relevant characters in the investigation.

Taylor said that his aide was at a restaurant with Sondland on July 26 — the day after Trump’s call with Zelensky that prompted the whistleblower to file a complaint — when Sondland called Trump, who the aide apparently overheard ask the EU ambassador about “the investigations.” Sondland reportedly told Trump the Ukrainians were ready to move forward, according to Taylor.

The Intelligence Committee said Wednesday that it has scheduled one of Taylor’s aides to privately testify on Friday. According to NBC News, that person’s name is David Holmes and is the same staff member who overheard Sondland’s call with Trump.

2. Both Witnesses Used Their Opening Statements To Stress The Importance Of Protecting The U.S.-Ukraine Relationship

Taylor said that there are “two Ukraine stories” going on: one regarding Trump’s impeachment and the whistleblower’s complaint, in which the ambassador said the country is “merely an object”; and a “positive, bipartisan” one where Ukraine is the subject.

The ambassador discussed Ukraine’s struggle to maintain independence from Russia, and looks to Western countries like the United States for guidance about government and democracy. Ukraine has been receiving security assistance from the U.S. in order to protect itself from Russia, which is why Trump’s freezing of the assistance astonished Taylor.

“To withhold that assistance for no good reason other than help with a political campaign made no sense,” Taylor said. “It was counterproductive to all of what we had been trying to do. It was illogical. It could not be explained. It was crazy.”

Kent also explained the importance of Ukraine to American foreign policy, saying that the country’s success “is very much in our national interest.”

“The Russians are violating all of the rules, treaties, understandings, that they committed to that actually kept the peace in Europe for nearly 70 years. That rule of law ... was violated by the Russians and if we don’t push back on that, on those violations, then that will continue,” Taylor said. “And that, Mr. Chairman, affects us. It affects the world that we live in, that our children will grow up in, and our grandchildren.”

3. Both Witnesses Highlighted Concerns About Rudy Giuliani’s Involvement In Ukraine

Taylor said at the hearing that Giuliani, Trump’s personal attorney, “undercut” U.S. foreign policy by creating an unofficial backchannel to Ukrainian officials. He also said he thought it was “crazy” that the White House considered freezing military aid to Ukraine for political reasons.

Kent built upon Taylor’s concern, saying in his opening statement that it was “unexpected, and most unfortunate, to watch some Americans ― including those who allied themselves with corrupt Ukrainians in pursuit of private agendas ― launch attacks on dedicated public servants.” The diplomat was referencing Giuliani’s disparagement of Marie Yovanovitch, the former ambassador to Ukraine whom Trump decided to recall in response to conspiracy theories spread by his personal attorney.

Kent added that he realized in mid-August that “Giuliani’s efforts to gin up politically motivated investigations were now infecting U.S. engagement with Ukraine.”

Rep. Val Demings (D-Fla.) asked Taylor and Kent whether Giuliani was promoting U.S. national interests or policy while meddling in Ukraine. Both witnesses said no.

“I believe he was looking to dig up political dirt against a potential rival in the next election cycle,” Kent responded. Taylor agreed.

Giuliani told CNN during the hearing that he didn’t do anything wrong, a defense he’s consistently used throughout this investigation.

4. The Lawyer For Republicans Based A Line Of Questioning On Whether Or Not Trump’s Request Was ‘Outlandish’

GOP lawyer Steve Castor made his debut appearance on Wednesday, and many of his leading questions fell short as Taylor and Kent stuck with what they knew.

Castor pointed out Taylor’s earlier remarks that Giuliani’s backchannel to Ukrainian officials was an “irregular” way to conduct diplomacy.

Taylor laughed at the bizarre question before saying that it could, indeed, always be worse.

“It’s not as outlandish as it could be, I agree,” the ambassador said.

The GOP counsel then said Sondland’s involvement in Ukrainian dealings was “certainly not outlandish” despite it not being part of the European Union ambassador’s official duties.

“It’s a little unusual for the U.S. ambassador to the EU to play a role in Ukraine policy,” Taylor retorted.

“OK, it might be irregular, but it’s certainly not outlandish,” Castor said, prompting Taylor to look baffled.

The exchange drew reactions on Twitter from observers who teased Castor for his line of defense for Republicans.

5. Republican Committee Members Filled Their Questions With Conspiracies And Contradictions

Part of Republicans’ arguments were based on the unsubstantiated conspiracy theories found in far-right media that initially fueled Trump’s suspicions of Ukraine and his push to investigate the Bidens. Several GOP members also tried to make the argument that Trump did not commit a crime because his attempt at a quid pro quo was exactly that ― an attempt.

The GOP’s counsel introduced confusion with his bizarre questions, including the “outlandish” ones, plus a query directed at Taylor about whether Trump should be upset by reports of Ukrainian officials opposing his presidential candidacy. Taylor responded that the president mentioned during his 2016 campaign that he might let Russia keep Crimea, and that that “sentiment is amazingly inflammatory to all Ukrainians.”

While the questions may make good television clips for Trump and his base, they often left Kent and Taylor looking baffled and confused about how to respond to right-wing conspiracy theories.

6. The GOP Criticized Democrats For Not Bringing In Direct Witnesses Despite That Being The White House’s Fault

Throughout the hearing ― especially during the lightning round where lawmakers were given five minutes to question the witnesses ― Republicans remarked that Taylor and Kent’s testimony cannot be taken seriously because they are not direct witnesses of any wrongdoing by Trump.

The White House’s own Twitter account posted during the hearing: “Don’t rely on second, third, and fourth-hand accounts.”

But in reality, White House orders blocking direct witnesses from testifying is the reason that Democrats have been unable to speak with more people who have firsthand knowledge of wrongdoing.

Some of the witnesses Democrats have subpoenaed to appear before the investigating committees are White House chief of staff Mick Mulvaney, Energy Secretary Rick Perry and former national security adviser John Bolton. All refused to testify because of a White House order directing employees of the administration to not comply with the impeachment investigation.

Bolton’s former deputy, Charles Kupperman, filed a lawsuit asking a federal judge to determine whether a House subpoena has more power than the White House directive. If the judge rules in favor of the House, Kupperman and Bolton both said they will testify.

7. Impeachment Investigators Clashed Along Party Lines When It Came To Sharing The Whistleblower’s Identity

GOP members repeatedly brought up the fact that the whistleblower who filed the bombshell complaint that spurred the impeachment investigation remains anonymous. Those same members also criticized Schiff for not bringing the whistleblower in to testify. (Schiff has said that there’s no need to risk the anonymous intelligence official’s safety when other witnesses have corroborated the complaint’s allegations.)

Several Republicans, including Rep. Jim Jordan (Ohio), accused Schiff of previously speaking to the whistleblower and refusing to release details of such alleged discussions with the rest of the Intelligence Committee. The chairman stressed throughout the hearing that he has not communicated with the whistleblower, and that accusations otherwise are false.

“We’ll never get a chance to question” the person that “started it all,” Jordan said, referencing the whistleblower.

“I’d be glad to have the person who ‘started it all’ come in and testify,” Rep. Peter Welch (D-Vt.) said in response. “President Trump is welcome to take a seat right there.”

The attorneys sent a cease-and-desist letter earlier this month to the White House’s legal counsel, urging the president to stop the dangerous rhetoric that could put the whistleblower’s life at risk. They also said their client would be willing to answer Republicans’ questions in writing, though the committee’s ranking member, Rep. Devin Nunes (R-Calif.), rejected the invitation.

After Wednesday’s impeachment hearing, Republicans tried to pass a motion to subpoena the whistleblower to come testify. The motion was tabled, meaning it did not pass.